Let’s get in touch… 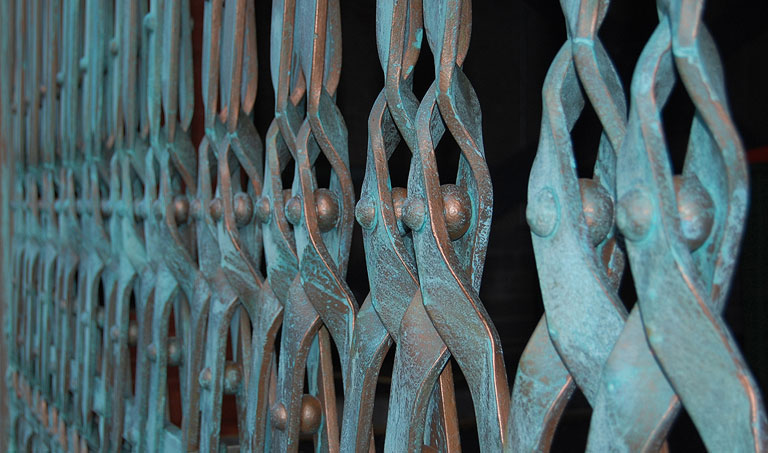 Research into the local and historical perspective of a project form a considerable element of the creative input, planning and design stage of many of our schemes. The Urban Village Gates in Swansea is a good example of this.  DAR Design Ltd designed, manufactured and installed the gates in consultation with architects Holder Mathias, structural engineers ATEB Consult and client Coastal Housing.

The brief was to develop a design concept for both the main pedestrian access gates to the new ‘Urban Village’ residential, retail and commercial complex and service yard gates. Both sets of gates are located on the front elevation of the building accessed from Swansea High Street.

The pedestrian gates needed a reasonable amount of openness enabling the public to see through and beyond when the gates were closed out of business hours. In contrast the service yard gates would be permanently closed, allowing access to service vehicles only, and needed to be denser so as to obscure what lay behind.

The design of the gates is based on Gores (segment) maps referencing Swansea industrial connection with the rest of the world. The rear of the complex fronts the Strand, a road which historically was a canal along which much of the cargo entering and leaving Swansea would be transported. In the 18th and 19th Centuries this was heavily dominated by the copper industry, followed by tinplate in the late 19th century. Since the 20th century and evermore so in the 21st century education has been one of the major industries with Swansea University attracting students from all over the world.

The heavy tapering elements of the pedestrian gate create the exceptionally strong lattice effect which gives the design its structure, it also creates the 12 shield shapes which are characteristic of a Gore. In contrast to the forged, galvanised and copper painted gate structure the Map elements or Gore is fabricated in 316 stainless steel.

The service yard gate follows the same theme but with double the number of vertical elements which help to obscure what is behind the gate.